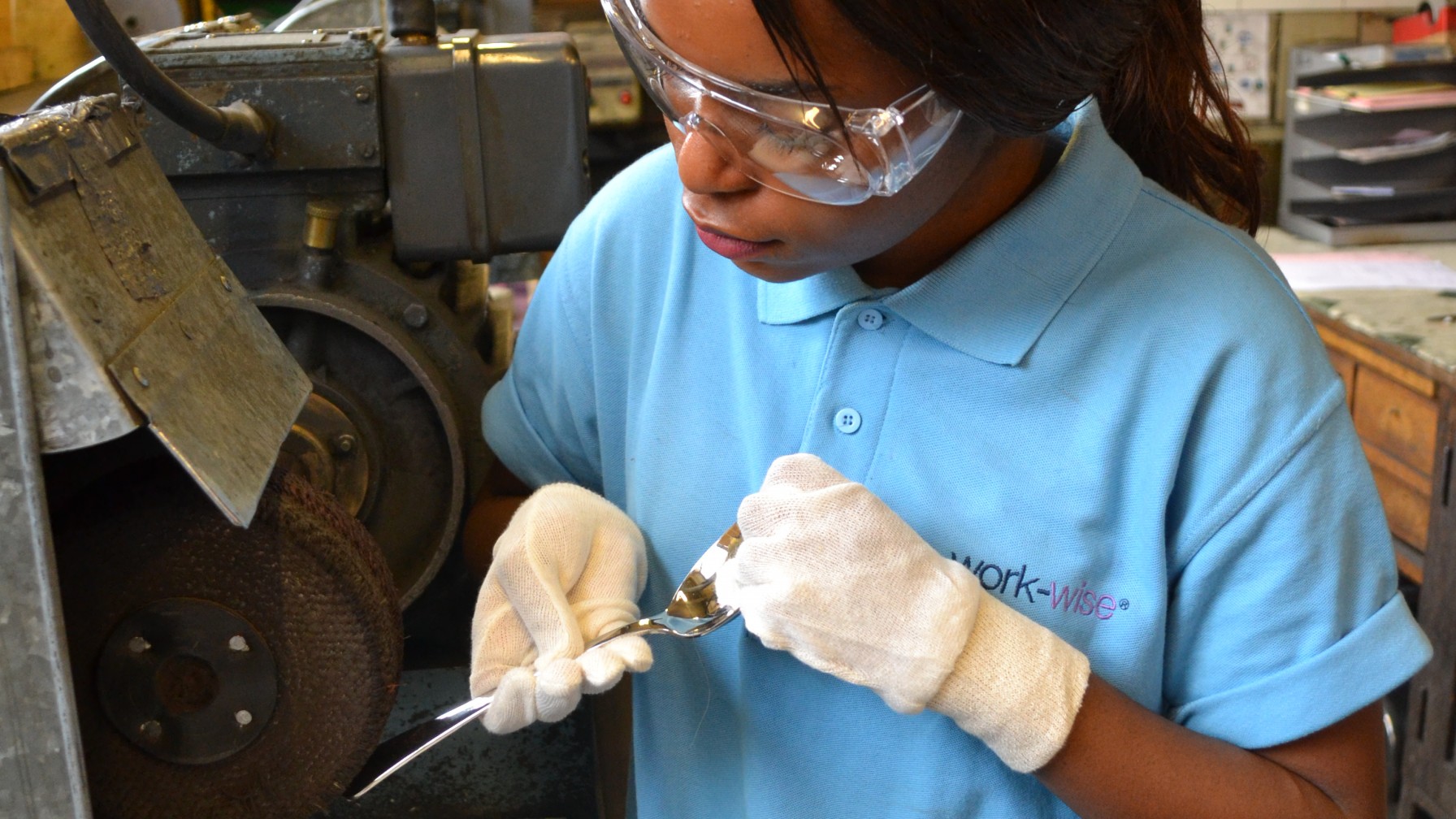 Students on the BLBW Engineering/Manufacturing programme

At the heart of ‘Better Learners Better Workers’ is the delivery of a high quality student Ambassador Programme in each employment sector. Each year, eight students are selected for an extra award, Gold Ambassador, to recognise outstanding progress, creativity and all round excellence. In 2015, there were Gold Ambassadors from a variety of sectors including Computer Science, Retail, Healthcare and Engineering.

Amy-Jo Laycock was recognised for her excellence on the Computer Science programme, where she gained an insight into a range of computing opportunities in workshops at University of Sheffield, combined with employer visits and mentoring. She comments, “It was important to be determined in all the work that we did throughout the scheme, making things happen and constantly looking for improvements and new ways to solve issues.”

Reflecting on her time as a Better Learners Better Workers Ambassador, Amy-Jo adds, “This has been a life changing experience for me, enabling new careers and friendships.”

Mbachi Kambele was awarded Gold Ambassador status on the Engineering programme. One of Mbachi’s highlights was organising an exhibition stand at the prestigious ‘Get Up to Speed’ engineering skills event at the Magna Science Adventure Centre, which involved everything from floor planning to lighting set up. She also enjoyed an eye-opening visit to the Advanced Manufacturing Research Centre (AMRC).  Mbachi comments, “We had a day of looking at how to get into engineering and all the opportunities that are there, especially for women. It was important because they were telling us about the lack of women in engineering.”

Speaking on how the programme has changed her as a person, Mbachi adds, “It’s made me more open minded to the world of work. I thought the only careers of interest to me were in science and medicine, but now I’m aware of other things. I’m also more resilient, because the employers I worked for gave me all these responsibilities and expected me to work to their standards.”

Mbachi found her Better Learners Better Workers Skills Passport very useful – a logbook where students reflect on their learning against a checklist of 18 skills identified by employers as vital for employment. She says, “I used it in two interviews which were successful. I had interviews for STORMS, a medical outreach team, and for volunteering opportunities at the Sheffield Children’s Hospital. The Skills Passport really helped me stand out, it’s a good way to prove those qualities.”

Sasha Clapham graduated from the Better Learners Better Workers NHS Healthcare programme with Gold Ambassador status.  She particularly enjoyed discovering the wide variety of medical fields in the NHS and how many different organisations actually contribute to patient care.

Sasha took part in a two-week work experience within the Northern General Hospital’s catering department, where she went into the dining rooms to see how they function. She says, “I really enjoyed the work experience because it took me out of my comfort zone and I actually got to experience what it would be like working in the NHS.”

Sasha is now studying A Levels, and says that the Skills Passport gained on the programme has helped her significantly: “It’s been useful because it’s helped me to track and see what skills I have developed and what areas need improving.”

Going forward, Sasha says that being part of the Better Learners Better Workers programme has inspired her to pursue a career within the NHS: “We learnt about occupational therapy, and I was quite interested in that so I looked into it and I feel like that’s the perfect career path for me.”

She adds, “I would definitely recommend the programme to others, because it’s a great opportunity to experience what the NHS is about, as it’s a lot different to what people think. It’s not just about medical jobs – there’s research, there’s a lot of team work, and a whole lot of other organisations that contribute.”

Sheridan Oates was recognised for her outstanding achievement on the Better Learners Better Workers Retail programme, which involved visits from industry speakers and access behind the scenes in places such as the Meadowhall Centre. Students from a number of different schools take part in the programme.

Reflecting on her time as a Retail ambassador, Sheridan says, “It’s helped me develop different skills, which I have utilised in my subsequent college work. I’ve gained the confidence to be able to talk to people a lot more easily and not get so frightened. By working with people that aren’t the same age as you and who aren’t your immediate friends, it helps you see things from other perspectives.” She adds, “Everybody’s always really interested when I say that I am a Better Learners Better Workers Gold Ambassador. The programme really did help me, and I would recommend it to others because you get to meet new people, you get to build on skills, and I have made lifelong friends.”

The programme inspired Sheridan to want to start her own business and she is now studying Enterprise at the Sheffield College: “It helped me to see all the back-stage stuff that I wouldn’t have necessarily thought of to do with opening a business. In my course, I’m currently producing a product that I hope to sell on to customers. I plan to own my own business and I don’t think I’d have ever thought that without doing the Better Learners Better Workers programme.”