Engineering Ambassadors Wow the Crowds at Get up to Speed 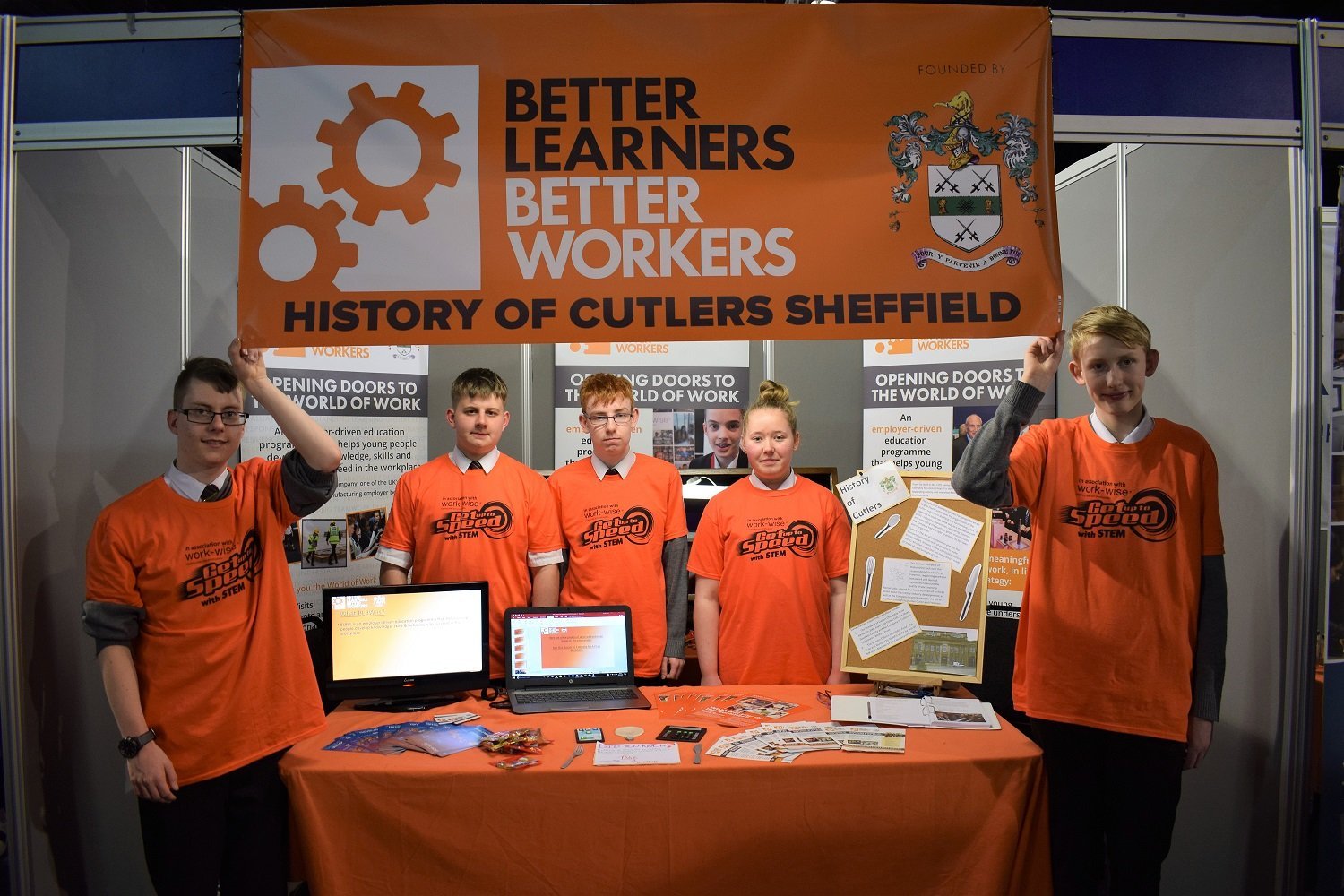 Year 10 Engineering Ambassadors on the Better Learners Better Workers programme wowed attendees at the annual Get Up To Speed event at Magna Science and Adventure Centre. The free event is an interactive showcase to inspire and inform young people about science and technology.

Get Up To Speed 2018 saw over 2300 visitors through the doors, with 48 Schools attending and 71 exhibitors and attractions. The event is organised by the work-wise Foundation, with 2018 being the fourth year that the highly acclaimed careers event was held in Rotherham.

As part of the Engineering programme, founded by the prestigious industry body, the Cutlers’ Company, Ambassadors are heavily involved in the planning and execution of the Get Up To Speed event. Whilst some acted as stewards on the day, two groups of Ambassadors from Stocksbridge High School and Westfield School were tasked with representing the Better Learners Better Workers Programme and the Cutlers’ Company on an exhibition stand and greeting VIPs.

Ambassadors had to source the materials and design the activities for their stand, which demonstrated the history of the Cuters’ Company and offered information to schools on the Better Learners Better Workers programme.

The Ambassadors from Stocksbridge School had sourced the prestigious Millennium Sword from the Cutlers’ Hall, home of the Cutlers’ Company, for display on their exhibition stand – one of only two swords ever made, with the other being on display in London. The artefact was displayed amongst other historical items of silverware that the Ambassadors had recreated using clay to show the history of the Cutlers’.

In addition to the 3D models, Ambassadors also prepared an online quiz for attendees, as well as creating and sourcing leaflets with information about the Better Learners Better Workers Programme to raise awareness.

The monumental task put the 15 Better Learners Better Workers skills that Ambassadors have been developing over the last two years to the test. In the planning and execution of Get up to Speed, Ambassadors had to work together as a team, assign roles and order or create materials in time for the event, testing their communication, professionalism, team working, determination, resilience and more. Their efforts paid off and Ambassadors displayed tremendous confidence whilst talking to attendees at the exhibition stand.

Dana, one of the Stocksbridge Engineering Ambassadors said: “I’ve really enjoyed working together as a team on this task. I’ve built up my teamworking skills whilst being on the programme and for today’s event I have managed the team so that we could get the materials on time and create activities for the stand.”

Fellow Ambassador Tom added: “I’ve developed a lot of skills on this programme, and this challenge allowed me to plan and organise the exhibition. I had to think of ways to promote the Cutlers’ Company and the Better Learners Better Workers programme and keep people interested. I also had to think about sourcing different materials for the stand and how long it would take so that we could get them in time for the event.”

George, another Ambassador involved in the task said: “I would definitely recommend this programme to others as it’s a good thing to do. You get lots of experience of the world of work and it builds your confidence. There’s lots of visits to Engineering companies such as Tinsley Bridge and you get to be involved in Get up to Speed, which is a great event.”

John Barber, CEO at the work-wise Foundation, who also deliver the Engineering strand of BLBW, and organiser of Get up to Speed said: “We involve the ambassadors each year in Get up to Speed as our very own “gamesmakers” and they never cease to impress and amaze us with their creativity and enthusiasm on the day. They are easily visible to visitors in their bright orange T Shirts and GUTS gives them a great opportunity to demonstrate all the skills they have learnt over the previous two years.”